Citizens of 29 U.S. states have the opportunity to choose a party affiliation when they register to vote, or else to register as 'unaffiliated.' Here in North Carolina those unaffiliated voters (UNAs) are the electorate's fastest-growing segment, outnumbering Republicans and on course to overtake Democrats. 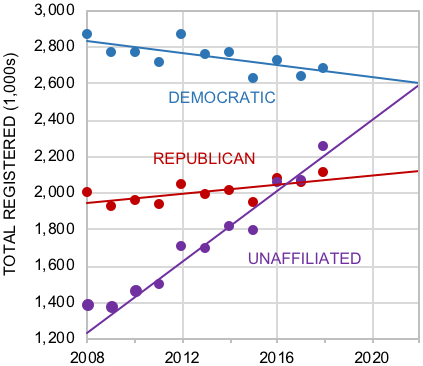 Because they don't wear their political sympathies on their sleeves, UNAs are the unknown X factor in political calculations. Pundits who consider them at all often do so only in generalizations that are short on actionable insights.

But viewing unaffiliated voters as a monolithic mass of partisans without parties – particularly in the absence of solid evidence to back up that opinion – can dangerously mislead campaigns into forgoing efforts to court the swing voters that must surely be numbered among them. Are swing-voting UNAs' numbers sufficiently great to deserve a progressive campaign's attention? Fortunately, here in North Carolina, that question is uniquely answerable.

Not surprisingly, partisan UNAs look much like registered members of the parties they favor: Democratic-leaning partisans are younger, far more racially diverse, and more likely to be women than are Republican-leaners. Swing-voting UNAs, on the other hand, differ from partisans in important ways that may provide important insights into their distinctive concerns.

Since at least 2012 (Figure 3), partisan-Rep UNAs are old and trending older, while partisan-Dem UNAs are young and getting younger (their median ages in 2018 were 58 and 49, respectively). In contrast, swing-Rep and swing-Dem UNAs are about equally elderly (medians 62 and 60, respectively), and recent years have seen relatively little change.

Again like their party-affiliated peers, partisan-Dem UNAs are far more likely to be people of color (28% of their numbers in 2018, and growing) than are partisan-Reps (5%). Meanwhile, swing-Dem UNAs are much more likely to be white than are partisan-Dems, as unaffiliated swing voters of both affinities are converging toward 8% people of color. The takeaway here is that swing-voting among UNAs appears to be largely a non-Hispanic white phenomenon.

Note: as used here, the term "people of color" comprises the Board of Elections-mandated groupings Asian, African American, American Indian, non-white Hispanic, people of two or more races, and 'other.' The category thus excludes only non-Hispanic whites. The small minority of voters who choose not to specify their races when they register to vote are excluded from this portion of our analysis.

Partisan-Dem UNAs are more likely to be female than are partisan-Rep UNAs, and that hasn't changed much in recent years (Figure 5). But on the swing side, 2018's apparent sharp increase in female swing-Reps deserves comment. Women didn't suddenly swing Republican last year. Rather, 2018 witnessed an unusually large number of previously swing-Rep men who (according to our algorithm) flipped to partisan-Rep last year, leaving women over-represented among remaining swing-Reps. While right-wing men's political sympathies appear to be hardening in the age of Trump, female conservatives' attachment to the Republican party remains considerably more provisional.